Peace in the Valley 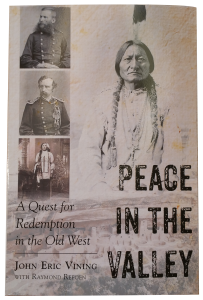 Mark Gamble is one of the greatest sharpshooters in the Civil War’s Confederate Army of Tennessee. He is well-known on both sides of the battle line: revered by his compatriots and feared by his enemies. Mark’s own fear is that his soul is lost forever as his lust for killing increasingly takes over his entire being.

After he is severely wounded at the Battle of Lookout Mountain on November 24, 1863, Mark is captured by Union soldiers and placed in a federal military hospital in Chattanooga, Tennessee. There he is nursed back to health by the lovely Ruth Taylor, a Quaker nurse/volunteer at the hospital. Falling in love with the gentle and caring Ruth, he eventually wins her hand in marriage. The war ends. Mark converts to the Society of Friends, and Mark and Ruth settle into what would seem to be a “happily ever after” life of farming in the lush valleys of the Appalachian Mountains near Allentown, Pennsylvania.

But Ruth feels a call in her life to serve as a missionary to the Brule Lakota (Sioux) in Western Nebraska—a tribe that is slowly being decimated by white encroachment. With deep misgivings, Mark agrees to accompany her, and the couple moves to the West to answer Ruth’s calling.

Can Ruth survive the tough, brutal life of a Great Plains wife and missionary? Can Mark serve as both a companion to his wife and a mentor to the distrusting Native American tribe while withstanding the pressures inherent to an Indian agent? Most importantly, can Mark, with the grace of God and a spirit of self-forgiveness, find redemption for his many transgressions as a missionary to a dying race on the bleak, windswept barrens of the western Great Plains?